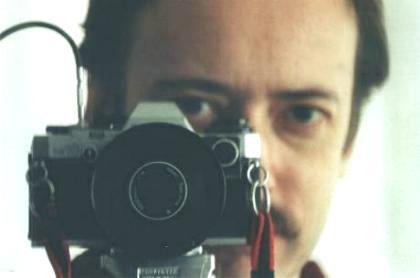 About the picture above:
Self portrait, 1995: "Mirror, mirror, mirror..." Shot with my first Olympus OM camera, an OM-10, using a Tokina 500/8 reflex (mirror) lens, aimed at a mirror. Electronically scanned and mirrored to reverse the mirror effect :-)

About me and this site:
No I'm not an Olympus Saleman, I don't have an Online Shop and I'm not sponsored or authorized by Olympus to build or maintain this site. It really is just a hobby of mine (or should I call it an addiction, aka Zuikoholism :-). The truth about Olympus is that they no longer seem to care about developing and promoting the OM System and may even dump it entirely in the  future. But OM-lovers on the world keep the fire burning and exchange information about the OM System, and so do I. After you've browsed my site and some of the other unofficial Olympus OM sites and also visited the official Olympus pages in Japan, America and Europe, you will come to the conclusion that the unofficial sites including mine contain zillion times more information about Olympus OM than the official pages...
If you share my love for OM, and want to discuss with OM-lovers all over the world, follow my links page to the Olympus Mailing List, and subscribe. Who am I and what am I? Well I was born on 31 august 1956, live near Amsterdam, studied biology in Amsterdam but my  profession is computer programmer, specialized in Pascal and Delphi. 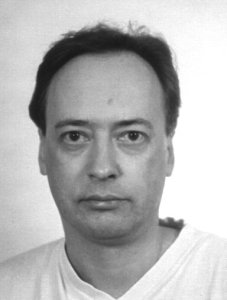 This is what I look like, according to my passport...

About my photography and equipment:
This site is mainly devoted to equipment, but of course these are just tools used for photography. I have lots of equipment, but I'm not a collector or camera freak. I only buy something when I think I can use it. And I will use it even if it has supposed collecters items value, like my 40mm/F2.0 and 50-250mm/F5 Zuiko lenses. These lenses are much too beautiful to put them in a showcase - Olympus OM is a Photographers System, not a Snob System!
I've been into photography since 1968 (aged 12), using a Kodak Instamatic my dad gave me. Olympus came in the picture in 1988, when my girl friend wanted a new camera and I wisely advised her to buy something seriously rather than yet another P&S. At the Amsterdam camerashop my eyes fell on an Olympus OM-10 with a Tokina 35-105mm. She never really got acquinted with this camera, so I was really the only one that ever used it. For seven years I only had this single combination.
A few years ago I bought my girl friend a camera more suitable for her -a Yashica T5- and took over the OM-10. But at that time I was already convinced I was really more interested in the professional OM bodies (the OM-1(n), OM-2(n), OM-3(Ti), OM-4(Ti)). When I bought a couple of these the OM-10 became obsolete, and I traded it for an OM-30, just out of curiousity for its AF capabilities (I also bought the 35-70mm AF zoom lens), but after playing with it for a while I traded it for a lens. The bodies I currently have are an OM-1, OM-2n, OM-3, OM-4 and my favourite: an OM-4Ti.
And lenses? Since 1995 I've been caught with an addiction commonly referred to as 'Zuikoholism' and have been expanding my equipment at  a large scale. From 17mm to 600mm, fast fixed focal lengths, zoom lenses, macro lenses - everything was interesting enough for me to get it. I won't tell you the exact number of lenses I got because it is too embarressing, is subject to continuous change and I've lost count anyway :-). My personal favourites include the two lenses mentioned above, the 50mm/F1.2 Zuiko, 85mm/F2 Zuiko, a Vivitar Series 1 28-90mm/F2.8-3.5 (my standard zoom), and a Tamron (Adaptall) 300mm/F2.8.
My personal favourite photographic subjects are (female) portraiture, fashion, unposed people photography, stage photography, architecture and macro photography. Well take a look at my portfolio to get an impression. Now that The Unofficial Olympus Sales Information File is finished, I'll add more stuff here. Don't miss my Katja Schuurman B&W Blues Page and Candy Dulfer in Paradiso Page! 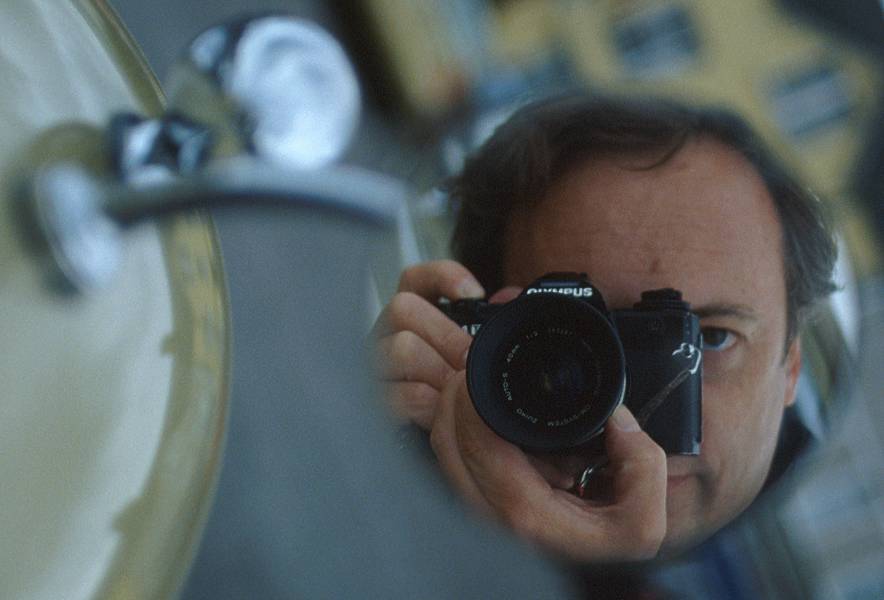 Another self portrait, Dingle, Ireland, 2000.
Shot in the mirror of an oldtimer, using the Olympus OM-4Ti and the lovely Zuiko 40mm/F2 pancake lens (disguised with its out-of-proportions hood).

Do you have comments, errata or suggestions? Mail me!